The application of various surgical robot systems is becoming wider in the last few years. Beijing Jishuitan hospital designed a brand new orthopedics surgery robot recently. The new robot workstation combines the robot technique with the navigation technique to try to achieve a better accuracy. We did the first two upper cervical robot-assisted spine surgeries in the world. We also did the first robot-assisted CAMISS (computer-assisted minimally invasive spine surgery) around the world.

After planning of trajectories in the host machine by surgeons, the guide holder that mounted on the robot arm moved spontaneously to the exact entry point according to the plan. Through the holder, surgeon drilled the guide pins and then placed the screws. Postoperative CT images were taken and merged with the surgical plan, the deviation of planned screw position and actual screw position was measured. Operating time, blood loss and postoperative neurovascular complications were also recorded.

As the first robot-assisted CAMISS around the world, before this human surgery, we had tried percutaneous pedicle screw fixation on 5 mini-pigs and got satisfied results.

A 28-year-old male presented with back pain after a fall injury. He had no neurologic deficit on neurological examination. The lumbar CT images demonstrated that there was a burst fracture of L1 vertebrae body (Figure 3).

he surgery was taken on August 6th, 2015. After general anesthesia and patient positioning (prone), we placed the patient tracker on the spinous process of T10. 3D C-arm scanning and robotic planning was carried out using TiRobot system. Virtual drill trajectories were planned on the 3-dimensional software (Figure 4). 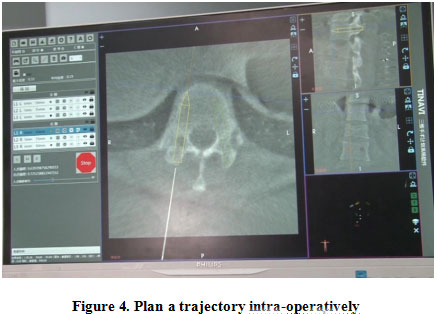 There was no intraoperative complication. The patient had maintained full extremity strength and sensation. By postoperative CT images (1 day) (Figure 5), there was no perforation and loose of the screw. 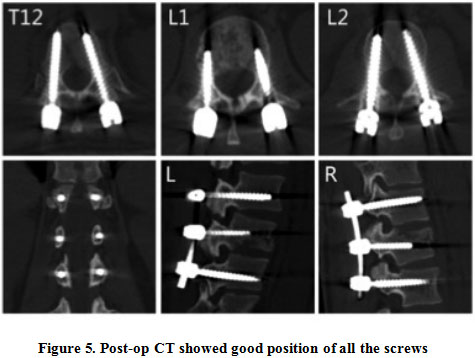